So, Persona 4 Dancing All Night, the dancing game spin-off of Persona 4 was recently released in Japan on June 25th. People who bought it were lucky enough to find with the game a new trailer for Persona 5 with some additional gameplay footage.

Some images from this same trailer were already leaked, but a lot of the trailer videos that were uploaded on Youtube were already taken down. I managed to finally find a subbed version of this trailer that’s still up on DailyMotion. 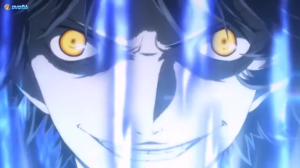 As we can see in the first seconds of the trailer, it seems like the Persona takes over the character when he switches into his vigilante identity. From a frail-looking high-school student, the protagonist turns into a grinning Shadow Self, a concept already seen in Persona 2, Persona 4 and its spin-offs.

But instead of fighting it, the protagonist seems to embrace it. He needs its power to (literally) free himself from the shackles that restrain him and fight for the justice he believes in. Even Ryuji, a member of the Protagonist’s band of thieves, is confronted by his Shadow Self. Look at the 01:30 mark in the video.

As usual in Persona games, the main characters will face many ordeals during their quest that they need to deal with. We can infer from the all the trailers that the game will deal with the weight of social perception and norms on people. Can one fight these norms and do what he truly believes in knowing that he will face rejection from everyone? Or must he conform for the greater good?

Even the sound when summoning a Persona in the game is different from the other games. It was changed to a “snap” sound, “implying that the characters have hit a breaking point of some kind, which results in the manifestation of their Persona”.

These are still just basic assumptions on the game, but they might not be that far from what will be featured in the final game and from the main themes addressed in the Persona series.

We are also introduced to a new character, a blue-haired guy painting “Never Give in” on the walls at the 01:41 mark. How he is linked to the Protagonist’s group is still unknown.

Gameplay-wise, there are some noticeable aspects worth discussing.

First, enemies will no longer consist of just Shadows. Demons will join the bunch, too. As seen in the trailer, the group was fighting demons like Sandman and Pyro Jack. As seen at the 01:15 mark, one demon burst from one of the Shadows and the group had to fight it. This seems like a new way to acquire demons/Persona cards to use in next battles.

Also, all characters will be equipped with long-range weapons, in addition to their melee weapons :

This begins to look a lot like the original Shin Megami Tensei games, if you ask me! But I’m fine with that.

Finally, no definitive release date for Japan, but we can still hope that the game will hit the shelves for Winter 2015 and also hope for a fast Western release in 2016.