With just a couple of weeks left before E3 2015, Nintendo recently uploaded – as what they call it – a Nintendo Direct Micro. The video stars Bill Trinen, the Director of Product Marketing at Nintendo of America. Fun fact, Bill majored in Japanese and acts currently as an interpreter for Shigeru Miyamoto.

Our “little” fellow Bill has some cool announcements before E3 2015:

If you don’t want to go through the whole 17-minute video, here are some highlights:

A sidescroller game starring Nintendo’s little robot, with mechanics revolving around a plug Chibi Robo can use as means to attack ennemies, destroy obstacles or grab onto platforms.

Since it’s Nintendo, there will also be an Amiibo, along a special bundle game+Amiibo. Using it will enable Chibi Robo to transform into Super Chibi Robo and gain a boost in speed and an increased reach with its plug. Playing with the Amiibo levels it up and unlocks in-game items. Further Amiibo functions will be implemented.

A new Dr. Mario game for all you puzzle fans. Some new things were added : the Miracle Cure which are in-game bonuses (remove all viruses in one column, remove viruses of the same color, destroy viruses in an area, …), playing as Dr. Luigi with L-shaped capsules, multiplayer features, …

Strangely enough, the gun is gray like the initial version of the Zapper before Nintendo switched it back to orange to make it look less like a real gun. Not as powerful as the other guns, it seems the gun is more efficient in ink consumption and charging up its special power, the Echolocator. The N Zapper 85 also comes with splat bombs to cover more area.

A free new map, Port Mackerel, will also be available. It looks like a harbour-themed map with containers filling up the space. 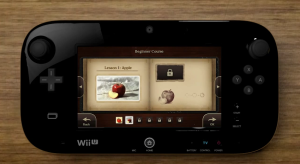 Home Studio expands over the previous Art Academy, Sketchpad released in 2013. Among new features, users will be able to upload a time-lapse video.

A new project by Bandai Namco exclusively for the WiiU. It is a free-to-play coop game where the goal is to scavenge treasures from dungeons riddled with monsters, zombies and the like.

Nintendo will revive this video game competition from the 90’s for E3 2015. It will begin at 3PM.

A new game based on the toys and the anime series.

Bravely Second is coming west in 2016!

And last but not least! Nintendo has officially confirmed that the sequel to Bravely Default will come indeed to Western audiences next year. I just can’t wait to play it.

So, which game are you the most excited to play? Let me know in the comments.